The 2010 Tour de Cure in St. Louis was only recently put on my radar as something I wanted to do, and up until a few weeks ago I didn’t even have a road bike to ride it. But, over the winter I had been training very hard to get into better shape for my spring/summer mountain biking, and somewhere along the line the bug bit me to do a long road ride like this – 100 miles to be exact.

So, with two training rides of about 50 miles under my belt I headed to Grafton IL to give this a shot. I had no doubt I could sit in the saddle for 100 miles but any number of things could have happened to stop me from crossing the finish line. Fortunately, this story does have a happy ending! 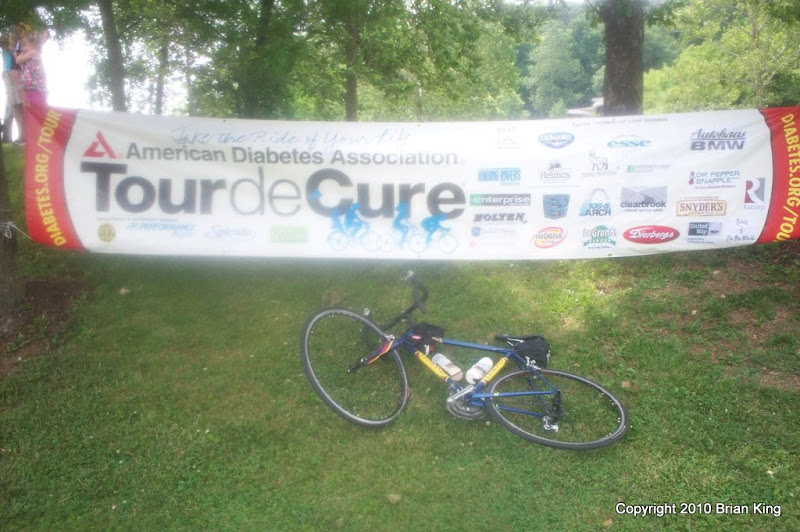 I gave myself an hour and 45 minutes to reach Grafton before the start of the race, and to my shock it took exactly that amount of time. I started to unload my bike just as the main group of 100 mile riders left. So much for taking pictures beforehand! I moved as fast as I could to get all my gear together and started after them, probably 10 or so minutes later. As it turned out, that would be the last time in a hundred miles that I would see that group.

The first few miles from Grafton to Pierre Marquette were along a rolling bike path which was really nice. I suspect the lead group probably stayed on the highway because they were following a police car – which meant they rolled through this section much faster than I did. I was following where the arrows told me to go, and they said to go on the wild path…which ended in a few miles at the first rest stop (the Gold’s Gym rest stop). I didn’t really need to stop, but did for about 2 minutes to refresh my water and start dumping in some Hammer Nutrition Perpetuem, which would be my primary fuel for the day. Off I went…

My first goal was to find a group of riders in a pace line so that I could tag along, and for the next 10 or so miles I bounced around a few groups trying to find a speed I could live with. By far the fastest section of my day, I cruised along fairly quickly on this stretch as it was cool and shady (the sun stayed in the clouds almost the whole ride) and I was fresh. Because the main field was up ahead though, there weren’t many organized groups trailing behind like me. This meant that most of the day was spent riding alone or in small disorganized clusters.

The next rest stop was at a small building of some sort and like all the rest stops in this race was well stocked with loads of food and beverages. I stopped here for another few minutes to get water, ice, and refill my bottle with some Perpeteum (which I did at every rest stop). As I took off I still felt really good and was able to keep a fairly brisk pace for the next 10 miles to the Kampsville rest stop. I ran into one nice chap who was riding a recumbent bike, and was telling me how he had done 11,000 miles in the past 3 years on it! We rode for a few miles and eventually he dropped in with a faster group and was gone… 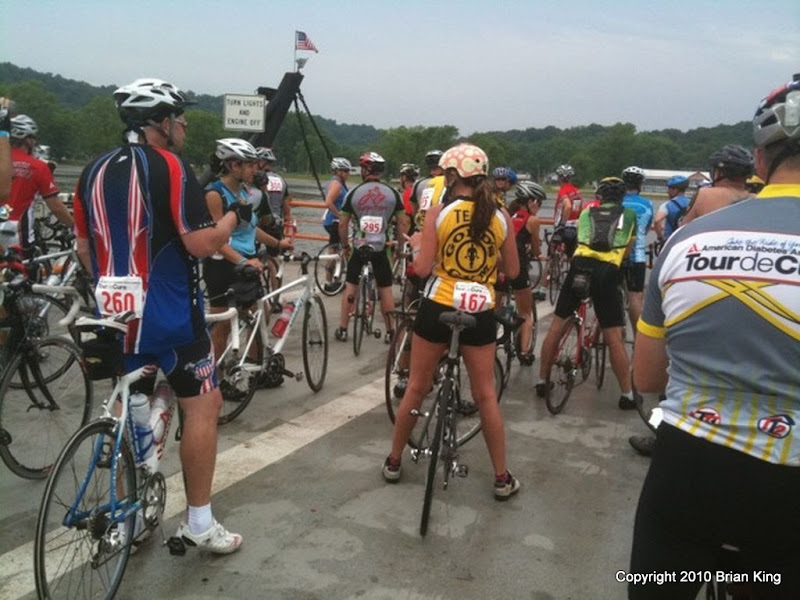 The Kampsville ferry was the highlight of the small town of Kampsville, IL and the 5 minute crossing gave me just enough time to snap a photo on my iPhone and upload it to Facebook. The rest stop was on the far side, and I stopped again before heading out onto the somewhat busy section of highway running between Kampsville and Hardin, IL. This was a tough 10 mile stretch, as we were now about 30 miles into the ride.

We crossed the bridge at Hardin and made our way to the next rest stop. I was only here for a couple minutes when my cousin came riding up. He also got a late start and was in a hurry to get back on the road. We chatted for a minute or so and then he was off and gone.

The next section had the only big climb of the day, which took us onto the bluffs above the rivers in the area. Not a difficult climb but after 40 miles of flats it was a change of pace. The scenery then changed to back roads through corn fields, rather than larger dual lane highways. I can’t say I was disappointed to be off the fast traffic roads for a while…

I stopped at the next rest stop and actually spent a few minutes sitting and eating some cookies. My plan was to depend on my Perpeteum the whole day, but I was sorely tempted by all the goodies I was passing up at the stops – and eventually I just had to have a rice crispy treat! I tempered it with a banana I think… I was off again on a fast highway for a short distance before getting back into the cornfields. The next section was one of the toughest of the day for some reason. Miles 50-65 seemed like a barren wasteland where the straight roads seemed to go on and on forever through the corn. The rest stop in Kane IL was the first one I was REALLY glad to see as I also ran out of water on this stretch…

Lunch was served in Kane, but a sandwich didn’t really appeal to me so I ended up eating a bag of chips and a banana just to give myself a little variety. After a few minutes of rest and a refill of water, I was back out on the blacktop. This next section I was feeling better, because I remember thinking so, but I can’t really recall much of this section of the ride until the end when we were skirting the edge of Jerseyville, IL and there were houses and such rather than cornfields. The next rest stop was at the City Park and was well stocked with nice volunteers (all of the rest stops were, it just seemed like this one had the most!). A quick rest and then off again!

The next section weaved in and out of the town of Jerseyville and I only remember snippets of this section — I think everything runs together when everywhere you look is a cornfield — including my only negative run in with a vehicle the whole day. A young kid in a red pick up yelled at me to get off the road. Apparently having 10s of miles between himself and the next vehicle plus me was just too much traffic.

In fact on this section I can’t recall seeing hardly anyone else on a bike. Miles were thinning out the riders to the point of extreme.

The desolation ended at the next rest stop, which had all the usual goodies and nice folks. They said we were getting close to the end! Only 15 short miles to go!

The next section was along another fast section of highway and I pushed pretty hard here so I wouldn’t have to be on it any longer than necessary. I think I passed one rider over the 4 or so miles until the next turn off. Once back onto the country roads I didn’t see anyone until very near the next rest stop. At one point I was on a straight piece of farm road and I could see in back of me and in front of me as far as I could and didn’t see any other bikers. I rolled into the last rest stop of the day to one of the most vocal stops, with a nice group of volunteers giving a rousing cheer to each new biker. It was a nice gesture given that we were well behind the main field and coming in by ourselves. This rest stop was the main event of the day, though I missed the bands, probably by a couple of hours.

The end of ride was almost just around the corner, and the only big hill of the day was a fast descent off the bluff into the town of Elsah, which is just a couple miles from the finish line. The last mile or so is along the Mississippi River and is quite nice.

The finish was a bit anti-climatic. There was a tent with some nice volunteers cheering for all the late arrivals and a few riders were still hanging around the area having chow. Otherwise, you’d hardly know you were finishing a 100 mile bike ride. Not sure what I was expecting. I was done – that is all that mattered I guess. 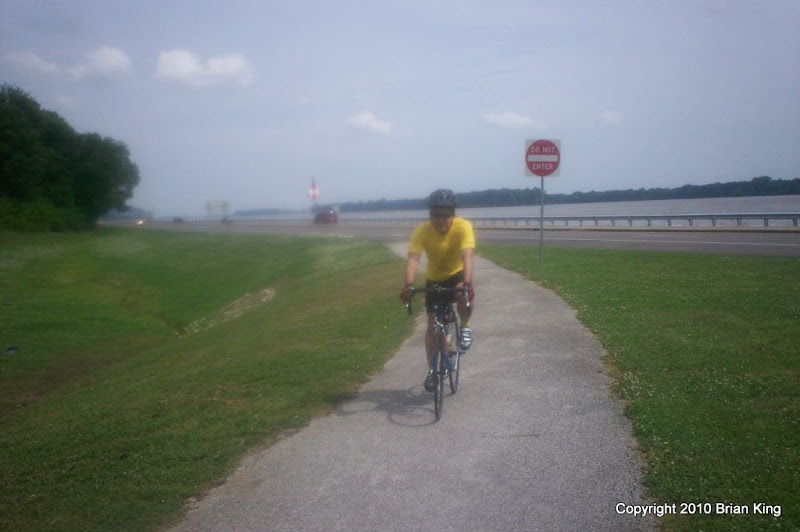 The thing that surprised me the most about the day was how much pedaling was involved. I know it sounds terribly obvious, but I figured there would be sections of up followed by sections where you could coast for a bit and catch your breath. It turns out that except for the very last hill (which lasted about 60 seconds), almost the entire course was flat enough that pedaling was required even on the gentle down slopes. I never doubted that I could finish the 100 miles, but I was surprised that it took me a full 8 hours of pedaling to do it! This put me at about 12.5 miles per hour, which seems rather slow for a road bike – but with 9 rest stops I guess it adds up. Next time I ride 100 miles I’m sure I can do better. It gives me something to aim for.

My nutrition plan was mostly intact. My Hammer Perpeteum worked the usual wonders, and I paired with with Endurolyte caps by Hammer, which prevented any leg cramping. When I finished the race I was definitely fatigued, but not exhausted. A couple recovery drinks and I was good to go for the drive home. The next day my legs felt tired, but weren’t in any pain. I credit this to good nutrition!

Thanks to all who donated to the ADA in my name so I could ride this race. I’m proud to have helped in some small way to fight diabetes and I’m looking forward to doing it again next year.