I don’t normally get involved in anything political, but in the rare instance where my passion (biking) crosses with political tomfoolery, I have to do something.  I want there to be a Tour of Missouri in 2010, but in my view it appears the whole world has assumed the tour will be canned after 2009 – and no one seems to be overly concerned.  Today, as the Tour of Missouri 2009 is underway, is when we need to raise awareness and get the Governor on board with saving it.  We can only do that by continually reminding him that there are constituents who passionately support this international sporting event.  Please consider a brief email to Governor Nixon and tell him thanks for supporting the race this year, but that it would be even better if he could pledge support publicly for the race in 2010.

Thank you governor for releasing the funds to bring the Tour of Missouri to our state in 2009.  However, now is the time to show support for the tour and publicly state your commitment to bring the tour back in 2010.  Not to state the obvious, but the economic impact by all accounts is a net positive, and this will only improve as the tour gets stronger.  The strength comes in knowing funding won’t suddenly be cut – which is where you come in.  As it is, everyone thinks you will leave the tour for dead after this year, which kills the enthusiasm of future potential sponsors, race teams and organizers, international tourists, etc. This is a self-fulfilling negative prophecy.

Please consider making a statement in support of the tour as it is happening this year if you haven’t already.

I’m not sure why I even bother, but I just can’t let this rest.  The 2009 race is happening right now, and NOW is the time we should be forcing our politicians to make the decision on keeping the race next year.  It would show good faith from the state, and remove the dark scythe hanging ominously above this race.  Even as the riders toil in the heat of the Missouri outlands – announcers, fans, and everyone else is saying this race is death warmed over…yet I don’t get the sense anyone is particularly concerned or doing anything about it!  The press should be constantly in the Governors face this whole week, talking about the good things this race is doing for Missouri this very instant, and get him on record either supporting it or explaining why it is bad for the state to support it.

Missouri is on the cusp of losing one of the most positive PR sporting events in the history of the state because they can’t get their act together.  I figure investing 1.5M dollars in return for 30M+ in revenues which are generated from having this seven day INTERNATIONAL sporting event would be a no-brainer. Is it politics?  Democratic Governor of Missouri wants it dead.  Republican Lt. Governor fought like hell to save it this year with an 11th hour rescue.  Can it really be that inane? There are three big bike races in the United States, though the Tour de Georgia apparently took this year off as they seek sponsors to foot the bill for 2010.  This leaves the Tour of Missouri and the Tour of California with 2009 races.  And here we are in prime time in the world’s eyes, and the state of Missouri looks like a bunch of chumps as we bumble around not knowing if the race will be back next year.  This hurts potential future sponsorships, this hurts television coverage (why bother if it is going to be canceled next year?), and it hurts Missouri tourism which is the primary sponsor of this race.

And, in what seems like a continuing series of complaints about the City of St. Louis and race planners, someone got the bright idea to place the start/finish line directly next to a median full of flowers on Market Street.  Then the announcers had the gall to berate anyone who was standing in the flower beds!  Congratulations – once again St. Louis looks like they can’t get their act together.  As you can see from this photo, the flowers are literally next to the start/finish – not somewhere people were standing just to be mean or bad citizens (as was implied by the announcers). 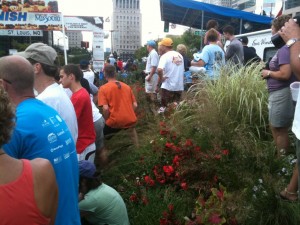 Don't stand in the flower beds!

I just can’t fathom why it is so important to have the race start and end in such a confined space, with literally 10 feet on either side of the race chute available for spectators.  If you aren’t standing on the guardrails for the entire race to protect your spot, you can forget about seeing the finish in real time.  I found this out the previous 2 years I’ve been to this race.  What this does is force people to hold their spots the whole four hours, rather than mosey around the tents to see what else is there.  Is it really that difficult to find some grand stands for people?  Why not have some high schools provide stands, and in return let them march their bands in between laps for some entertainment for the crowd?  The only entertainment we got was one motorcyclist doing stunts (interestingly enough, he is the only piece of entertainment for three years running).  Come on St. Louis, this is the best we can do?  One act?

This year there were no large screen TV’s showing the race at the finish line like previous years – which meant that once the peloton rounded the corner we had almost no idea what was going on.  This was bad.

Is it really so difficult to start and end the race somewhere like Forest Park, ideally along a hillside so that spectators could relax, bring blankets, enjoy the park, and see a good race without standing along hot guardrails for 4 hours?  Have the circuit go downtown to get your precious face time for the city, but don’t make the fans suffer for it.  Better still, have St. Louis be an end point of a stage race, rather than a circuit race.  Do a shot downtown, then a few laps through Forest Park for the big ending.  I don’t know if anyone has noticed, but the St. Louis circuit race is almost a carbon copy each year.  Time to mix it up.

Finally, I can say one good thing about this year in St. Louis – the photographers were asked to move back up the road far enough that they didn’t block all the spectators who were trying to see the big finish.  In year 1 they were right up at the finish line, making it impossible to see the winning sprint if you were behind them.  Not sure where they were in year 2 because I couldn’t see the finish.  Definitely an improvement.

And not to be totally negative, here are some ideas for improvement;

1. Improve the start/finish area.  Totally unacceptable to pack everyone in on a few small sidewalks, or worse in a half-mile of flower beds, and expect that to be OK.  Think this through a bit more next time.

2. There must be TV’s for spectators at the start/finish.

3. Bring in entertainment between laps if there is a circuit race.  You are trying to promote tourism.  Why not have Fred Bird there?  St. Louis Rams cheerleaders.  High school marching bands.  Allow regular bikers the ability to ride en masse through the start gate to get a taste of the race first hand and get on TV and get their bikes signed by riders later? Surely there are other ideas for entertainment which showcase Missouri that would do it for the positive exposure alone?

4. Have a camera on a roof top so as to capture the look of the peloton as it goes through the gate and as the big sprint happens at the end (since we can’t have helicopters this might be a poor man’s substitute).

5. If you are having money trouble, why not chip in with some other states to help?  The Tour de France isn’t solely a French affair, and it regularly travels in a half dozen other countries over the years.  Nobody wants to lose the exclusivity of only running through Missouri, but would it kill us to have a route spend time in neighboring states in return for help funding the Tour?  Off the top of my head, I could see a route going into Alton, doing a small loop in Illinois, and then heading back over the bridge.  A quick jaunt by the slaughter houses of the Kansas side of Kansas City might add some flavor to the race…

6. Politicians need to figure out a way to work together on this.  The tourism dollars alone make the decision to support the tour a NO BRAINER!  If we throw this away because of politics it will be a black stain on Missouri.

7. Get real time TV coverage.  How can an event this big, in our home state, not rate some kind of full length TV coverage?  I suspect it is because no one can sell advertising for this event.  Well congratulations – that is exactly what wishy washy support from the State of Missouri will do for you.  No one is going to pay for advertising on an event that no one knows is going to be around almost up until the time it happens!

8. Talk to Lance Armstrong.  If you can get him interested in having his Livestrong foundation have some role in the race, even making his group a prominent co-sponsor at no cost, the publicity alone will bring in tons more spectators.  Lance could single handed-ly save the Tour if the Missouri folks could play it smart.

I love the fact that Missouri has this incredible opportunity, and I fully expected the race would be canned this year.  I’m impressed that even at the late hour the race was saved, we were able to get seven professional racing teams to show up (we had 3 last year apparently).  Kudos to race organizers for doing the best they could with the time they were given. The race has lots of potential, even as other races fall from grace (Georgia).  But if Missouri blows this because of petty politics I’m going to be very disappointed in our elected representatives.  Not surprised mind you, just disappointed.

I’m not sure what the answer is here.  I’m just a guy who loves watching bike racing and I hate to watch this slow motion train wreck happen.  But what can we do to force the issue here, and fast?  I don’t know…